Gameplay Standards are extremely important when mapping a level as they determine how the player will see the world but also how the gameplay will be affected. Building a doorway to small or a ledge too high might result in poor game flow...

This document should help standardize the size and scale of MP/SP/Co-Op levels.

For high traffic areas it is sometime best to make it a double door.

32 units from the floor (CoDWaW)

“Cover Heights” is cover that protects the player below the gun. These measurements allow the player to be behind cover but still able to shoot over without changing stance, leaving him partially vulnerable.

There is a model in the game called static_opt_eng_dist_guide It has two rings around him, one at 512 and one at 1024. You can drop the model in your level to make sure your geo is not getting too big. 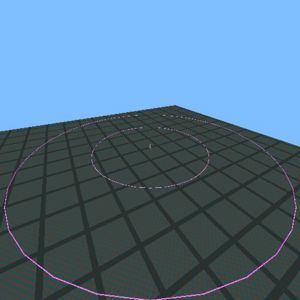